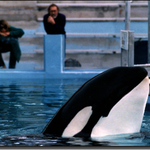 BC orcas Lolita-Tokitae and Corky are still imprisoned after many decades in tiny concrete aquarium jails. We continue to work to get them released. Can you help?

Speak to your MP and your MLA about it. Support the groups that are working for these whales' and other cetaceans' release to appropriate natural marine sanctuaries: www.animaljustice.ca,  and  www.whalesanctuaryproject.org (Nova Scotia):

JUNE 2022: ORCA AWARENESS MONTH
IN BRITISH COLUMBIA
Our work goes on every month:
To join our efforts to promote Whale Protection Zones around southern Vancouver Island, and a moratorium on the Chinook fishery, and reduction in underwater noise, boat collisions and whale entanglement in fishing gear, and to join the Bring Lolita Home campaign, contact sbjulian410@gmail.com.
For ORCA AWARENESS MONTH 2022, we're focusing on the plight of captive orcas including Corky and Lolita-Tokitae seized from waters off BC and Washington, and still imprisoned in whale-jail. Only a change in legislation in Canada and the U.S., criminalizing the captivity industry, will get those cetaceans free. Please read:
https://creativelyunited.org/orca-month-and-the-legal-fight-for-captive-whale-freedom/ 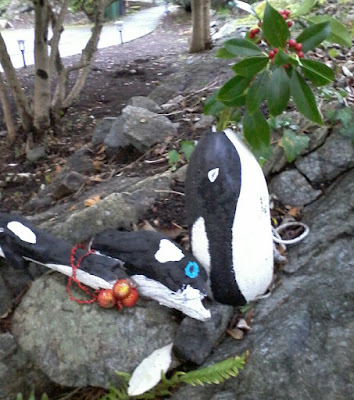 The Holly and the Orca -- Christmas garden display
Please make an Orca Garden for summer! Use black-and-white-painted driftwood -- you'll find lots of whale shapes washed
up on local beaches. Add bright fish, piles of shells …
let your imagine swim …
It's a fun family outdoor project and your
garden art might help keep the plight and needs of BC's
resident orca pods in the minds of people walking by.
Here's a "playlist" of video clips of orcas in the Salish Sea, summer 2021, from Gerald Graham @SalishSeaFuture:
https://www.youtube.com/playlist?list=PLJAAq8j4-vYSs2fkvZm3_Hc63xn3EIBF7
​https://naturecanada.ca/news/blog/help-celebrate-orca-awareness-month/
Nature Canada, June 17 2020
It is not only whales for whom the ocean habitat has been made hazardous by human activity. Sharks, birds and sea mammals are plagued by fish hooks coming from the commercial, food and sports fisheries. Here is an inspiring site about the work of an amazing diver (Cristina Zenato) who not only removes hooks from the bodies of sharks but befriends them in the process. Who knew about the existence of the teddy-shark??
See People of the Water:  https://pownonprofit.org/education-3/
Take a moment to sign the International Fund For Animal Welfare petition against the Icelandic whale hunt, which is close to being terminated. It is not popular in Iceland, where the majority support the flourishing whale-watch industry instead and only a tiny minority still eat whale meat. Join the international campaign with a simple signature: https://www.ifaw.is/about-the-campaign/
A supporter brings an exciting new book to our attention:
Spirits of the Coast: Orcas in Science, Art and History.
Produced by the Royal British Columbia Museum, " … this collection brings together diverse voices, young and old, to explore the magic, myths, and ecology of orcas. A literary and visual journey through past and possibility, Spirits of the Coast illustrates how these enigmatic animals have shaped us as much as our actions have impacted them …"  -- KinzieThings
(Full review and cover image at https://kinziethings.com/2020/04/15/review-spirits-of-the-coast-orcas-in-science-art-and-history/
JUNE - Orca Awareness Month is celebrated with public displays of information and art --
many artists find Orcinus orca splendidly inspiring.
From last year: "Superpod" by Natasha van Netten, in the Window Gallery of Ministry of Casual Living, in Odeon Lane (764 Yates Street), downtown Victoria, until June 20th: 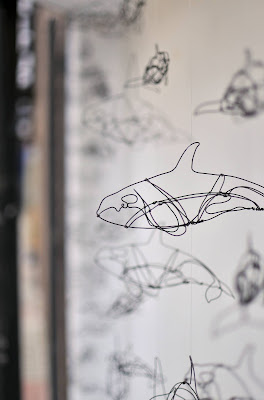 by Gayle Millbank (ending fishing gear entanglement is one of Orca Month's campaigns - see below): 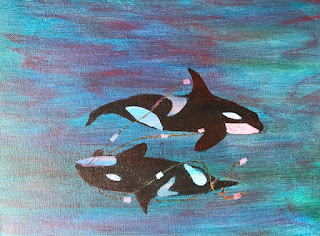 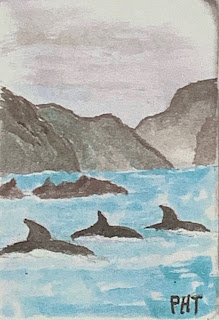 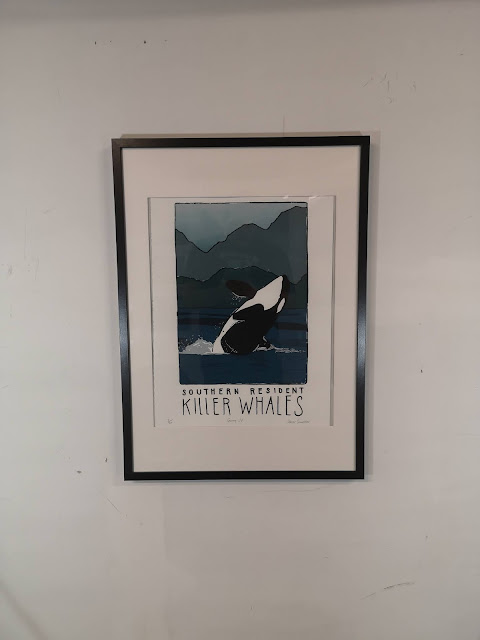 Some businesses are putting orca-assistance data and postcard give-aways in their windows, and some folks put art in their windows at home. Here's one from Jan and George in Victoria: 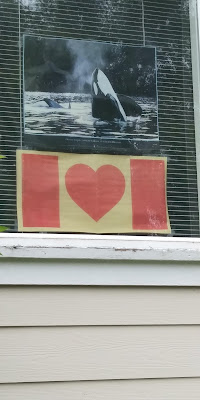 It's tragic to realize that since BC first proclaimed Orca Month in 2016, no progress has been made in freeing Lolita-Tokitae from Miami Seaquarium, This article from that time ("Black and White Lives Matter") is still unfortunately as current as ever:
https://countercurrents.org/2016/08/black-and-white-lives-matter/

YOU CAN HELP -- PLEASE SEND ORCA AWARENESS MONTH MESSAGES FOR LOLITA'S AND CORKY'S RELEASE TO THE 3 LEADERS OF THE JURISDICTIONS AROUND HER HOME WATERS, who should be speaking up for her to the Miami Seaquarium:
Premier Horgan:  premier@gov.bc.ca
Prime Minister Trudeau: Justin.trudeau@parl.gc.ca
Washington State Governor J. Inslee: use the form at
https://www.governor.wa.gov/contact

On the positive side, plans are unfolding for the coming whale sanctuary in Nova Scotia. See:  https://whalesanctuaryproject.org/
Senator Patricia Bovey - a BC resident - congratulates Whale Sanctuary Project for securing this location for whales to be freed to in future:
https://whalesanctuaryproject.org/canadian-senate-pays-tribute-to-work-of-whale-sanctuary-project/

Perhaps Lolita could also have sanctuary available in waters closer to home, on Hanson Island:  https://orcalab.org/2019/12/11/corkys-50th-capture-anniversary/ 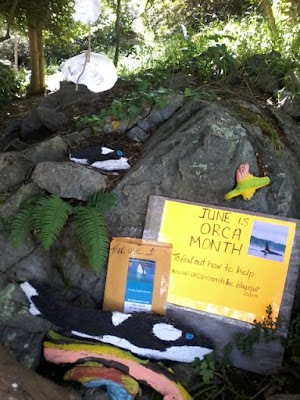 Part of our focus for ORCA MONTH 2022 is the urgent matter of lost fishing gear which entangles whales off BC, as elsewhere in the world's oceans. Here is a response from the provincial government when OrcaMonthBC asked them what efforts were being made to solve this problem:

Thank you for your email of November 9, 2019, addressed to the Honourable George Heyman, Minister of Environment and Climate Change Strategy, regarding the use of longline fishing equipment in B.C. Minister Heyman has asked that I respond on his behalf and I apologize for the delay in doing so.
During summer 2019, I travelled the coast of British Columbia meeting with local governments and community groups to hear about their experiences with the issues of abandoned vessels, marine debris and marine-sourced plastics. During these conversations, I heard about the need for additional ways of preventing ghost fishing gear. Our Fall Progress Report was posted in September, and on February 5, 2020, we published the full What We Heard summary. The next step will be submitting my final report with recommendations to Minister Heyman. To stay informed of progress on this initiative, I invite you to visit http://gov.bc.ca/MarineDebrisProtection.
Fisheries and Oceans Canada announced $8.3 million for retrieval of harmful ghost fishing gear and ensuring its proper disposal, and earlier this month they hosted a Gear Innovation Summit in Halifax, Nova Scotia. Because it is the federal government that has jurisdiction over navigation, fishing and marine mammals, they will lead on solutions, and I suggest you work directly with them.
Thank you again for taking the time to write.
Sincerely,
Sheila Malcolmson
MLA, Nanaimo
Parliamentary Secretary for Environment
Please join us in this campaign by continuing to write to your own MP to urge effective action.
If you see a whale or other marine mammal caught in fishing gear,
rope or plastic, please call:  1 800 465 4336.
Orca Awareness 2019 display at Qualicum Branch
Vancouver Island Regional Library: 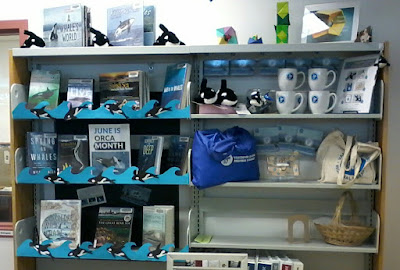 There are many ways of thinking and communicating about our cetacean neighbours in the Salish Sea, and one way to communicate their plight is through theatre. TOOKS ON COOK READERS' THEATRE hosted a performance at 1175 Cook St, Victoria, of:
"VOICES FROM BEYOND THE GRAVE"
Included was a poem about Orca J35 by Linda Rogers -- "A Lighter Blue"
"Seance" -- a comedy by Gary Johnson
"Orca Seance" -- a tragi-comedy by "Orcas"
Orca Month joined the Georgia Strait Alliance to display whale and marine information at the Oak Bay Green Committee's
PLASTICS RECYCLING DEPOT
See piles of plastic collected here on but ONE morning in ONE municipality. No wonder the oceans contain almost more plastic than living things, and that marine animals are choking on it. The world needs to curb that industry. It is the worst product of the fossil fuel industry, and Orca Month is glad that the current Government of Canada has introduced a plan to cut back on production and use in 2021. WE the consumers need to start now however: reject plastic products and packaging. Also, consider gathering friends for a BEACH CLEAN-UP at a beach near you. 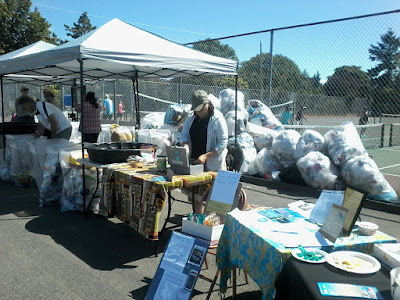 We may be staying home during the COVID epidemic but that doesn't mean we can't keep writing letters to MPs and the Minister of Fisheries & Oceans (address below), requesting stronger protections for orcas (as required by law under the Species At Risk Act -- although Canadians have yet to demand that those requirements are enforced). See orca needs listed below.

Are you an artist? Do you have a favourite cafe that might put up some whale art? An Orca Month MARINE ART SHOW was held at Caffe Misto in Victoria
2865 Foul Bay Road 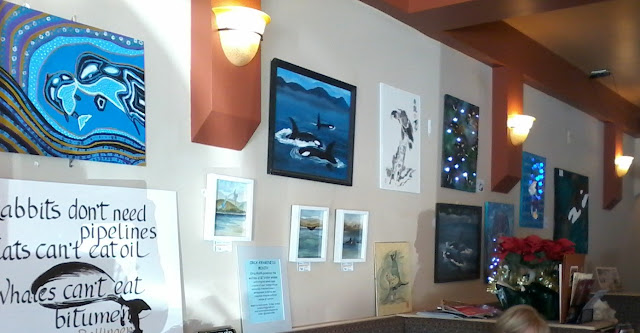 The Georgia Strait Alliance, David Suzuki Foundation, EcoJustice, Raincoast Foundation and other whale-defence groups, asked Parliament to pass an emergency order giving Salish Sea orcas dedicated feeding refuges in their hunting corridors -- a few have been set aside in 2019 south of Sooke, at the mouth of the Fraser River and near Saturna Island, but the returns of salmon to spawn in BC's rivers is abysmal this year. Nevertheless, the fishing industry continues to oppose non-fishing refuges for whales. To support salmon conservation and to ask the politicians to extend quiet zones for orcas, please write to your MP, the Minister of Fisheries (Hon. M-C Bibeau -- min@dfo-mpo.gc.ca), and the Prime Minister (pm@pm.gc.ca, or in print to: Justin Trudeau House of Commons Ottawa, ON K1A 0A6.

Ask the Navy to avoid using sonar in whale feeding areas off Vancouver Island. Engine noise as well as underwater sonar disorients them and drives them insane. Write to:

ESQUIMALTPACIFICNAVYPUBLICAFFAIRS@forces.gc.ca -- and to your MP

ADD YOUR VOICE! THE ORCAS NEED HELP.
https://openparliament.ca/bills/42-1/S-203/
PASSED! Bill S-203 banning whale captivity and breeding in aquariums. VICTORIES FOR WHALES AND DOLPHINS ARE INCREASING BUT THEIR PLIGHT WORSENS -- WE NEED TO DO MORE. CHINOOK FISHING MORATORIUM AN IMPORTANT NEXT STEP -- KEEP SPEAKING UP!
Jan. 2022 -- 0NLY ABOUT 73 SRKWs LEFT  (J, K, & L pods)
+ one new calf born last spring - we hope s/he will survive long enough to be counted a thriving new member of the pods 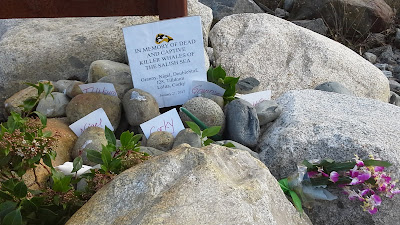 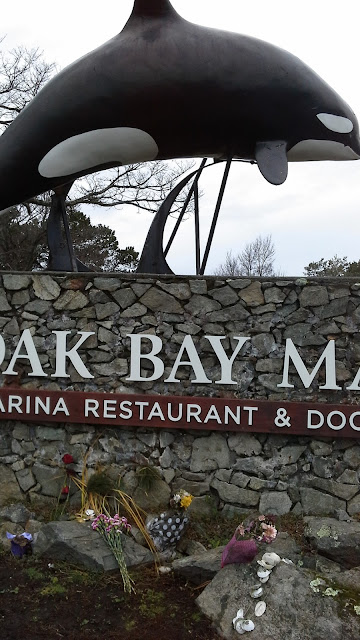 The ORCA AWARENESS MONTH team asks Premier Horgan of BC to join Washington and Canada in designating WHALE PROTECTION ZONES in the straits around Vancouver Island.
Please echo our request:

Orca Month Committee is also asking federal and provincial politicians to formally request the return of native killer whales Lolita and Corky to a sanctuary bay in BC or Washington State. See proposals from both www.whalesanctuarysociety.org, and www.orcanetwork.org. If cultural artifacts are requested to be returned, living wildlife certainly should be.

Posted by Alexandria P. at 2:51 PM No comments: 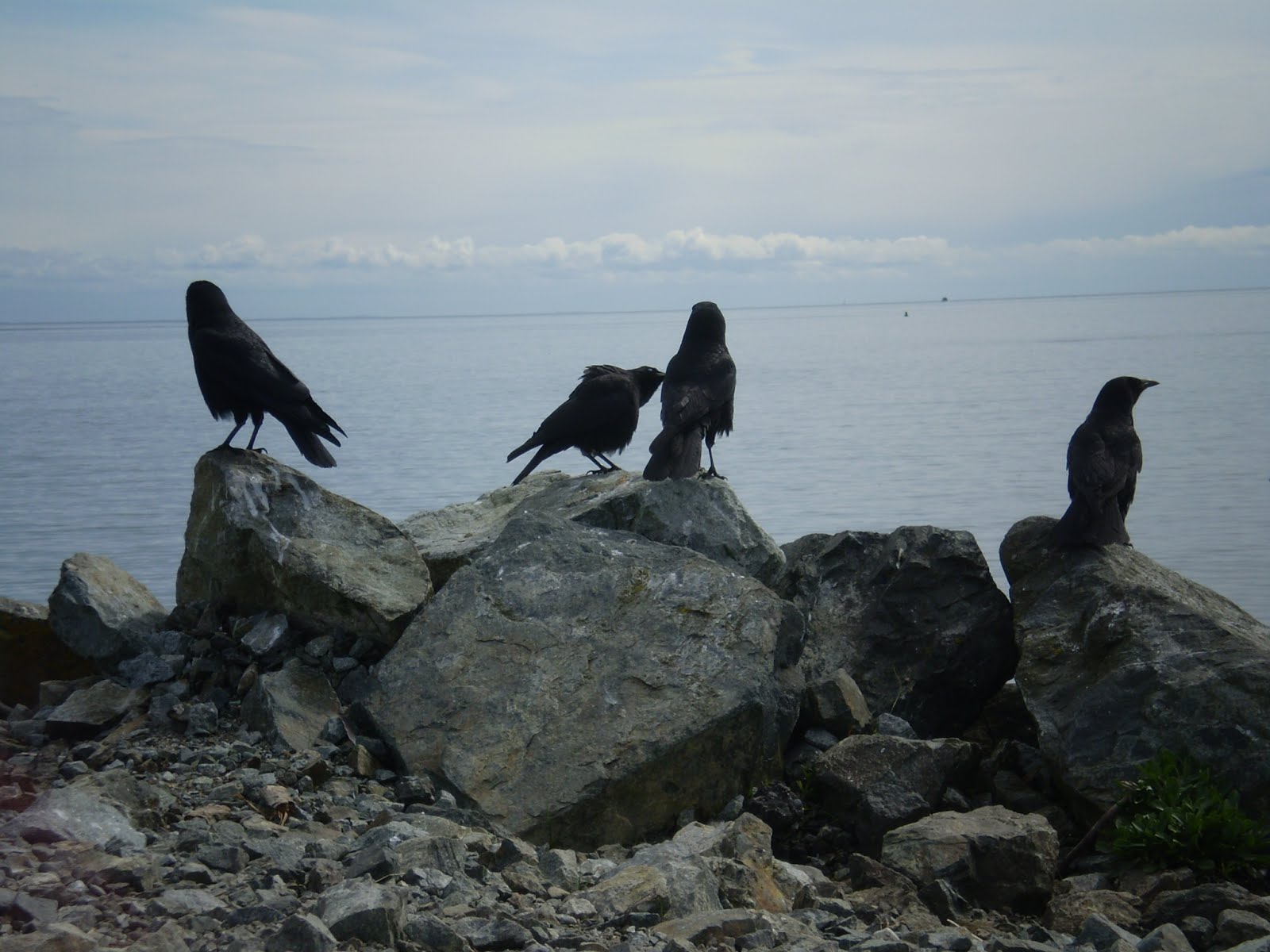 They're out there -- I see them